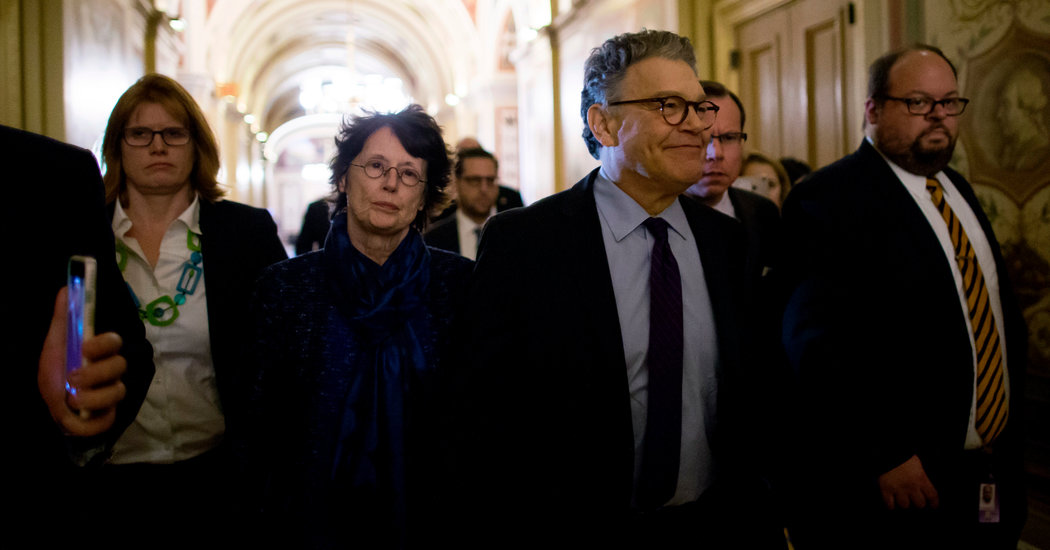 Al Franken to Resign From Senate Amid Harassment Allegations

The Democratic senator of Minnesota announced his plans to resign, a day after a sixth woman accused him of misconduct and dozens of his colleagues called for him to step down.

Human beings are animals, bottom line. And as such, we exhibit animalistic behaviors. We are not ethereal beings of light. We are self-aware, ambulatory, electrically activated bags of water, no more, no less. Based on stimulus, hormone bags squirt inside of us and we like it (or don’t like it) and we react or don’t. As a species, we work together for and we fight against each other for resources to survive and set our brain bags at peace (get a few good hormone squeezes). Just like any other animal.

We evolved, and in so determined to set ourselves aside from animals in one way, and one way only, we have LAW. LAW is humanity, not math, not technology, not tools, art, music, the rest…LAW is humanity. The Bible (like all religious texts) is an ancient book of laws and parables, resourced and compiled from oral traditions, tablets and texts before it. It is a set of software routines for your brain bags, an OS. You might have been instructed, by that very selfsame document, to confuse it for a supernatural communication from an ethereal plane. This, sadly, is very hard to substantiate. More likely, God is a ghost story about a long-dead, beloved warrior priest-king told and retold to the point of absurd exaggeration. So now he’s got superpowers. He flies through the sky. He knows when you’ve been sleeping, he knows when you’re awake and you better follow his rules. Right? Sure, if it helps you sleep at night.

So our country’s founders were pretty smart. They might have even been “enlightened” to the point of skepticism about many of God’s laws (And, don’t tell anyone, but perhaps even skeptical about God’s existence. SHHH!). And they set to separate God’s law from Man’s law. For the most part this has worked out pretty well. I’d say smashingly. In that I can write this prose without fear of my neighbors stoning me to death or beheading me as they do, and did, in cultures where this firewall is not in place (ya know, because their operating system tells them they have to).

SO I got off point. Animals, right?

Yeah, so we are pretty clever animals but, in this county, we (the enlightened) better figure out VERY QUICKLY the difference between EXTREMELY common, awkward, animalistic human interactions (driven by hormones and momentary lapses of reason) and malicious, malignant, predatory behavior (driven by those other two things, but mostly HATE). We better figure out the difference between people who admit their wrongdoing and apologize, and those who lie and defame their accusers. MOSTLY we better figure out how to FORGIVE those that have earned, asked for, and deserve FORGIVENESS. Because the people who want to DESTROY the FIREWALL between Man’s Law and God’s Law don’t care about any of this and are stacking the courts, legislatures and school boards across this county, as we eat our own in some retarded debate club purity campaign.

Isn’t it ironic that forgiveness is a God’s law and not a Man’s law, don’t you think. A little too ironic, and yeah I really do think. (IT’S LIKE RAY-E-AIN ON YOUR WEDDING DAY!)

Democrats and Women’s Rights Activists FAILED today, and it turns my stomach (I NEED A HORMONE BLAST, STAT!).